The historic town of Gold Hill and Gold Hill Mines Historic Park invite visitors to step back in time and experience the simple life of a nineteenth century gold mining village. The wood sidewalks are reminiscent of the Old West. But in fact, Gold Hill, North Carolina was a well established gold mining boom town by the early 1840’s, almost a decade before the gold strike at Sutter’s Mill in California. With a bustling main street that spanned a mile in its day, Gold Hill boasted of at least sixteen merchants, twenty-three saloons and about six establishments with ladies-in-calling, a twenty room hotel and a two-story mining office. It was a town of which, even the mayor of Charlotte, NC was envious, making newspaper headlines when he commented that he had hopes that “Charlotte will one day be as big and prosperous as Gold Hill.”

The first discovery of gold at Gold Hill was in 1824. But it wasn’t until 1843 that the town had grown into a bustling metropolis in need of a post office. A formal ‘town’ meeting was held and Col. George Barnhardt, son-in-law of John Reed (Reed Gold Mine), was chosen as the first mayor. Under his management, the Barnhardt Gold Mine at a depth of 435ft. was becoming the largest producer of gold in the south. Not to be outdone, the Earnhardt family across the street opened the Earnhardt/Randolph Gold Mine to an eventual depth of 850ft. Between the two mines alone, they produced a wealth of gold valued at seven to nine million dollars prior to the California gold strike. The news didn’t stop production of gold on the eastern front. The Carolina gold mines continued to prosper and lead the way in gold production until the beginning of the Civil War.

By the 1880’s “The New Gold Hill Ltd. Mining Co.” was established in London, England. The company purchased holdings at Gold Hill and produced equal amounts of gold for another twenty years at considerable profits. The Gold Hill mines ceased production by 1915. Explorations were made again in 1950 but proved to be too costly for the company as that time.

Today the Barnhardt Gold Mine and the Randolph Gold Mine, are two of four gold mines located on the 70 acre Gold Hill Mines Historic Park. The Historic Gold Hill and Mines Foundation, Inc., a non-profit organization was formed in 1992 to restore and preserve the mining property as a park for the community. The Gold Hill Rail Trail (the railroad corridor right-of-way through the park which extends into Cabarrus County) was developed in 2005 as a partnership with The Land Trust for Central North Carolina and was added as an additional hiking trail through Gold Hill Mines Historic Park. 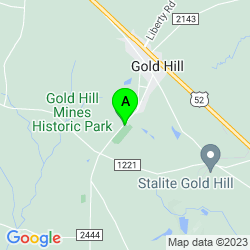